"The Principle of Sovereignty under challenge” Says Ambassador Fabian 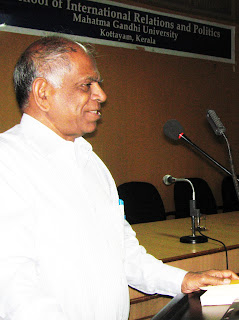 The concept of sovereignty is a widely contested theme in the conduct of diplomacy and international relations, as challenging as it were in the social science discourse, according to Ambassador K. P. Fabian, Diplomat-in-Residence, K.P.S Menon Chair for Diplomatic Studies, School of International Relations and Politics (SIRP), Mahatma Gandhi University. He was delivering the K.P.S. Menon Lecture on “Sovereignty: A Critical Examination” at the SIRP today. Mr. Fabian said that the contradiction and complexities of engaging ‘sovereignty’ were nowhere evident than in the very operation of the United Nations (UN). The UN has been founded on the principle of the sovereign equality of all its members, but a close reading of the many of the provisions of the UN Charter shows that “this assertion is not to be taken seriously.” He said that if the “principle of sovereign equality is to be taken seriously, the Security Council members should be chosen through voting by member states.” It is possible “to factor into the rules for election geographical balance and other relevant factors.” But it will be “irresponsibly idealistic and pathetically naïve to expect endorsement of any such proposal from the current Permanent Members of the Security Council. Without their endorsement no amendment to the Charter can be possible.” He concluded that the UN Charter “has patently inconsistent provisions as far as sovereignty is concerned.” However, he pointed out that the UN Charter is not the first international treaty to fail to comply with the principle of sovereign equality. The Vienna Congress of 1815, to decide on the political arrangements in Europe after Napoleon’s defeat, attended by almost all the states in the continent, never met in plenary. All work was done in committees, he pointed out. Prof. K.M.Seethi, Dean of Social Sciences and Coordinator K.P. S. Menon Chair welcomed. Prof A.M. Thomas, Prof. Mathew Kurian, M.V.Bijulal, Ms. Parvathy, Mr. Navas, Dr. Santhosh and others spoke.
Posted by Unknown at 02:05 No comments: