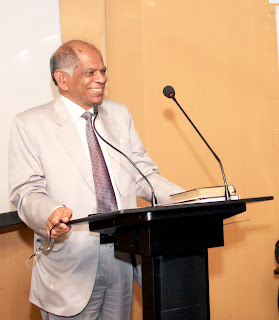 “India-China war occurred in 1962 primarily because Mao wanted to “teach Nehru a lesson,” says Ambassador K. P. Fabian, former diplomat and foreign policy analyst. Mr. Fabian who has been nominated to the K.P.S. Menon Chair for Diplomatic Studies, School of International Relations and Politics (SIRP), Mahatma Gandhi University, was delivering the Inaugural Lecture 2012 on “The 1962 War Between India and China” at the SIRP today. Mr. Fabian said that Mao sought to initiate  a war because he believed that Nehru was behind the 1959 anti-China uprising in Tibet and that therefore in order to secure Tibet for China, Nehru and India should be made to understand the might and determination of China to hold on to Tibet. But the fact of the matter was that Nehru had nothing to do with the 1959 revolt, pointed out by Mr Fabian.

Ambassador Fabian observed that it was wrong “to have signed the Panchsheel with Mao who believed that power came from the barrel of the gun.” He further argued that “India facilitated China’s invasion and occupation in two ways. India prevented a discussion of the matter at UN when El Salvador raised it. India argued that there was no need for any discussion as China had ‘assured’ India of its peaceful intentions.”  Moreover, “India helped China use the Calcutta port for sending supplies to Tibet as China had no convenient land access to Tibet till it completed stealthily the Aksain Chin Road while India slept.”

Ambassador Fabian said that India signed a trade and transit agreement on Tibet charitably giving away all its rights there in return for China’s agreeing to sign on the Panchsheel.  He said that that Indian foreign policy “attached more importance to the text rather than to the context.” After the war, V K Krishna Menon who was India’s defence minister during the war wrote that China violated the Panchsheel as “the territorial limits of India were clearly and distinctly laid down in the Indian Constitution of 1950.” 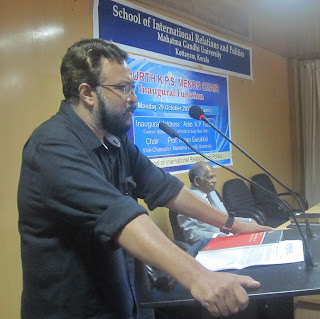 Ambassador Fabian argued that “India’s trade with China should not be romanticised.” India exports iron ore and imports finished products. The two-way trade amounts to $74 billion with a $24 billion deficit for India. “It is a wrong view that the more trade between India and China the better would be the political relations between the two. Let us not forget that France and Germany had a high level of trade in 1914, yet they had gone to war.”

Ambassador  Fabian said that it would be in India’s interest that the “US has a large military presence in East Asia(being shifted from West Asia) so that China is kept in check and prevented from causing trouble at the border.” He said that “it is important to learn from the past. Of course, it is preferable to learn from other people’s mistakes rather than from one’s own. Yet, at times, we refuse to learn from our own mistakes.” 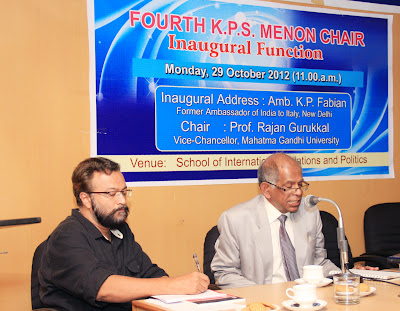 Referring to secrecy in diplomacy and war, he said that “we now have access to Chinese archives even as we lack access to our own. The Henderson-Bhaghat Report on why India was unprepared and unequipped to deal with the aggression is yet to be published though there is no good reason to keep it secret.” Ambassador Fabian pointed out that those who assert that “the war broke out because Nehru publicly told the Indian army to throw the Chinese out are wrong.” He said that “much before the war, Mao asked his generals about the competence of General B M Kaul. They said that his record was ordinary. ‘He will get a chance to shine,”he quoted Mao.

Prof. K.M.Seethi Dean of Social Sciences and Coordinator K.P. S. Menon Chair welcomed and Mr. M.V.Bijulal proposed vote of thanks. Ambassador Fabian will be offering Special Lectures in the University till March 2013.