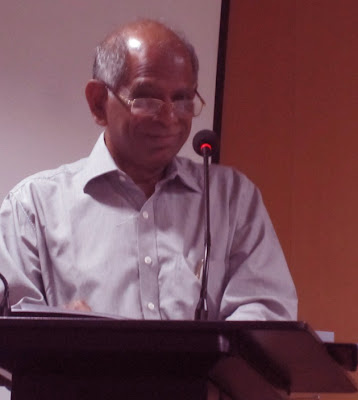 Ambassador K. P. Fabian, former diplomat and foreign policy analyst, has been nominated to the K.P.S.Menon Chair for Diplomatic Studies, School of International Relations and Politics (SIRP), Mahatma Gandhi University for the academic year 2012-13. Ambassador Fabian will be the fourth Visiting Scholar of the KPS Menon Chair.

Ambassador Fabian joined the Indian Foreign Service in 1964 and served in embassies in Madagascar, Austria, Iran (1976-79), Sri Lanka, and Canada before moving to Finland as Ambassador in 1987. One of the turbulent times of his tenure was in Iran where he witnessed the 1979 Revolution. He was Acting High Commissioner in Canada at the time of Khalistan agitation and the Blue Star Operation. Ambassador Fabian was Joint Secretary(Gulf) from 1988 to 1992 and served as the coordinator for the evacuation of  176,000 Indians from the Kuwait and Iraq. He was also Ambassador to Qatar (1992-97) and Italy (1997-2000). Ambassador Fabian represented India at the International Atomic Energy Agency, UNIDO, ICAO, FAO, IFAD, WFP and at many international conferences. His publications include COMMONSENSE ON WAR ON IRAQ (2003), DIPLOMACY:INDIAN STYLE (2012) and many other scholarly articles in journals and magazines.

Ambassador  Fabian will be offering Special Lectures in the University from 29 October onwards. His inaugural Lecture on “The 1962 War between China and India” will be held at 11 AM on Monday, 29 October 2012 at the SIRP Conference Hall. Dr. Rajan Gurukkal, Vice Chancellor will formally launch the activities of the Chair.