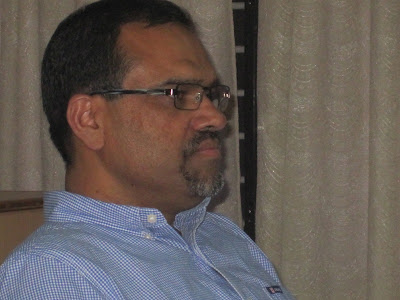 “Pakistan has been facing a geo-strategic curse in South Asia due to its location and the willingness of its elite to play geopolitical games,” says Prof. T. V. Paul, Director of the McGill University Centre for International Peace and Security Studies (CIPSS) and James McGill Professor of International Relations in the Department of Political Science at McGill University, Canada and the honorary professor at the K.P.S. Menon Chair for Diplomatic Studies, School of International Relations and Politics (SIRP), Mahatma Gandhi University. Prof. T.V. Paul was delivering a K.P.S. Menon Chair Special Lecture on “Pakistan: Explaining the Garrison State” at SIRP today.

According to Prof. Paul, “Pakistan’s geo-strategic role has benefitted the military but obviously hurt the ordinary people of Pakistan.” Prof. Paul termed this as “geostrategic curse” similar to “resource curse” that economists have identified as the cause for the tardy development of some oil-rich countries.  Despite periodic ups and downs in their relationship, Pakistan continued to be a key US ally since the mid-1950s. Pakistan’s participation in geopolitical competition brought billions of dollars and modern weapons to the country. The military and political elites who gained materially from this interaction had little reason to innovate in respect of the country’s economy or political order or initiate policies to extract internally from the semi-feudal landlord system. Foreign support was largely sufficient to wage war externally and create a garrison state internally. Thus, Pakistan became a rentier state, living off its external benefactors. “The American policymakers, in fact, preferred the Pakistan army to the country’s ramshackle group of political parties as they found the former to be the most reliable partners in their various geopolitical conflicts over the years,” Prof. Paul said.

Prof. Paul observed that “the military-bureaucratic elites have little corporate incentive to develop a liberal economic or political order that would undercut their paramount position in the Pakistani society.” Similar to oil-rich sheikdoms’ “resource curse,” geopolitical prominence inflicts a “curse” on a semi-feudal state with an intense national-security approach. Prof. Paul said that experiences have shown that “countries that are endowed with abundant natural resources often need not become successful economies let alone democracies. The reason is that the elite have little reason to innovate or engage in social reforms in order to obtain more resources for the population.”

He pointed out that Pakistan is one of the world’s lowest tax collecting states. Much of the rich including the political elite doesn’t pay any taxes in Pakistan. Quoting reports, he said that “out of more than 170 million Pakistanis, fewer than 2 per cent paid income tax, making Pakistan’s revenue from taxes among the lowest in the world, a notch below Sierra Leone’s as a ratio of tax to gross domestic product.”

Prof. Paul noted that a key effect of the “geostrategic curse” is the tendency to continue on the same path of easy money. The military, as beneficiaries of the rentier state attributes of the Pakistani economy, i.e. living off rents from external actors for security cooperation, exhibits a dearth of interest in transforming the society let alone improving the extractive and integrative power of the state. He said that a garrison army in a semi-feudal developing country is especially “prone to self-perpetuate its existence by inventing myths about national security threats and over a period of time becoming the core national actor in both the political and economic realms.”

Speaking on the internal situation, Prof. Paul observed that the civil society in Pakistan should have the power and inclination to demand new or refined institutions and continuously defend such institutions for democracy and development from onslaughts by the military. A weak civil society can simply perpetuate the existing system of uncertainty. He, however, said that the “Pakistani social classes, especially the middle and the working classes, are too weak to wage a social revolution that would overthrow the garrison state and generate a true democratic order.”  Pakistan’s transformation will take place only if both the strategic circumstances and the ideas and assumptions that the elite hold change fundamentally. In a highly globalized world, a traditional “garrison state is fast becoming an anachronism.” A pragmatic-minded elite and a tolerant and liberal civil society are essential for transformational change without which the purpose of the state becomes too narrow and out-of-date, he noted.