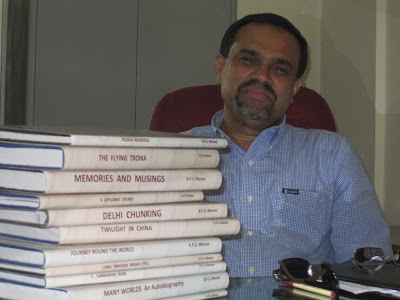 Prof. Paul has been working as the Director (Founding) of the McGill / University of Montreal Centre for International Peace and Security Studies (CIPSS). Prof. Paul specializes and teaches courses in international relations, especially international security, regional security and South Asia. With 12 books to his credit (all published through major university presses) and 45 journal articles or book chapters Paul has emerged as a leading International Relations scholar.

Prof. Paul was born in the Indian state of Kerala (Mevellor, Kottayam District) on November 10, 1956 and his early education was at institutions in Kerala. He completed his Masters in Political Science from Maharajas College, Ernakulum (affiliated to Kerala University)  in 1980 and then worked as a journalist for the Press Trust of India (PTI) news agency in New Delhi from 1980 till 1985. During this period, he completed his MPhil from the School of International Studies (SIS),  Jawaharlal Nehru University. From July 1985 till July 1986 he spent a year at the University of Queensland, Australia, as a research scholar. In July 1986 he was admitted to graduate studies at  the University of California, Los Angeles (UCLA) from where he completed his PhD in Political Science in June 1991. In September 1991, he began his teaching career at McGill University where he was appointed as an assistant professor, promoted and tenured to associate professor in 1995, and full professor in 2000.  In 2003, he was awarded the prestigious James McGill chair, instituted in the name of the university’s founder. He has been a visiting professor of National Security Affairs at the Naval Postgraduate School, Monterey, California (2002-03), visiting scholar at Harvard University’s Center for International Affairs (CFIA) and the Olin Institute for Strategic Studies (1997-98), and a senior visiting affiliate at the James Martin Center for Nonproliferation Studies, Monterey (2002-2003). Paul served as the Director of the McGill University-University of Montreal Research Group in International Security (REGIS) & Coordinator of  the South Asian Regional Cooperation Academic Network (SARCAN), both he co-founded. In October 2009, he helped convert REGIS as the Center for International Peace and Security Studies (CIPSS) and has been its McGill director since then. In 2009, he was elected as Chair of the International Security Studies Section (ISSS) of the International Studies Association (ISA) and began his two year term in March. He is also on the editorial boards of many scholarly journals including International Studies Quarterly, International Interactions, Contemporary Security Policy, and Non-Proliferation Review in addition to serving as a regular reviewer for many leading presses. He has travelled widely and given over 100 seminars at leading academic institutions worldwide.

Prof. Paul has made a number of contributions to the study of international relations, especially international security. He is especially known for rigorous puzzle-driven international relations scholarship utilizing case studies as opposed to paradigm-driven analyses. He has also been a proponent of eclectic modeling which he uses in several of his works. His first major book: Asymmetric Conflicts: War Initiation by Weaker Powers (Cambridge University Press, 1994) was pioneering as it addresses a neglected question of materially weaker powers starting wars against their stronger opponents. In his second authored book: Power versus Prudence: Why Nations Forgo Nuclear Weapons, (McGill-Queen’s University Prisms, 2000) he created a prudential realist model to explain the choices of many technologically capable states to forbear nuclear weapons. His third book: India in the World Order (co-authored with Baldev Nayar, Cambridge University Press, 2003) offers a rare theoretical exploration of India’s search for major power status and the constraints and opportunities that it has faced in that endeavor. Paul’s important policy-relevant contribution is the 2009 book: The Tradition of Non-use of Nuclear Weapons (Stanford University Press). This book explores the reasons why nuclear weapons have not been used since 1945, especially against non-nuclear states. It places the most important factor in an informal norm inherent in a tradition, a time-honored practice of non-use that has been followed by nuclear states since 1945 as an “accustomed obligation.”   In March 2010 his new co-authored book: Globalization and the National Security State (with Norrin Ripsman, New York: Oxford University Press) was published. It tests several of the globalization related hypotheses on state behavior in the security arena in a variety of regions and powers.

Prof. Paul has continued his scholarly contributions in seven edited volumes and nearly 45 journal articles/book chapters in venues such as International Security, Security Studies, Journal of Conflict Resolution, International Studies Review, and Millennium. The edited books are: South Asia’s Weak States: Understanding the Regional Insecurity Predicament (Stanford University  Press, 2010); Complex Deterrence: Strategy In the Global Age (with Patrick M. Morgan and James J. Wirtz, University of Chicago Press, 2009); The India-Pakistan Conflict: An Enduring Rivalry (Cambridge University Press, 2005); Balance of Power: Theory and Practice in the 21st Century (with James Wirtz and Michel Fortmann, Stanford University Press, 2004); The Nation-State in Question (with G. John Ikenberry and John A. Hall, Princeton University Press, 2003); International Order and the Future of World Politics (with John A. Hall, Cambridge University Press, 1999, 2000 (twice), 2001, 2002 & 2003); and The Absolute Weapon Revisited: Nuclear Arms and the Emerging International Order (with Richard Harknett and  James Wirtz, University of Michigan Press, 1998 & 2000). These works all resulted from academic conferences he had organized at McGill University. Many of these volumes are must reads in International Relations literature today. Five of his books have also been published in South Edition editions by Cambridge and Oxford University Presses in India.

Prof. Paul has been a conceptual innovator in international relations. He is especially known for his contribution to the debate on “soft balancing” and other associated concepts, “hard balancing” and “asymmetric balancing,” and  defining them.  Paul has also developed the concept of “complex deterrence” in his introduction to the volume: Complex Deterrence: Strategy in the Global Age. In recent years, Paul has turned his attention to security issues of South Asia region. The perpetual insecurity that the eight nations of the region face at inter-state, intra-state, and human levels have been the focus of his current work. He attributes this multifaceted insecurity to the weak state capacity and low levels of inter-state norms of cooperation and non-intervention among the regional states. His current project: Building Peace in South Asia is expected to offer many proposals drawn from International Relations scholarship on how to achieve durable peace in South Asia. He is also working another project on Status and Emerging Powers with Deborah Larson (UCLA) and William Wohlforth (Dartmouth College).