“India has a great opportunity to become a global leader in the arena of soft power,” according to Prof. T.V. Paul, Director of the McGill University Centre for International Peace and Security Studies (CIPSS) and James McGill Professor of International Relations in the Department of Political Science at McGill University, Canada who has been appointed as the honorary professor at the K.P.S. Menon Chair for Diplomatic Studies, School of International Relations and Politics (SIRP), Mahatma Gandhi University. Prof. T.V. Paul was delivering a Special Lecture on “India as a Soft power” organised by the Chair today.

He said that soft power, based on intangible indicators such as culture, civilization, literature, philosophy, institutional involvement, diplomacy, political organization, and state capacity, has emerged as an important factor in the globalizing world for a country seeking higher status and influence. India, with its unique cultural and civilisational strengths has tremendous assets in the soft power area, yet to be fully harnessed effectively. Its multi-ethnic culture, peace generating civilizational values (including religious and philosophical ideals), and the unique art forms and literatures are perhaps the core of this soft power asset mix. More importantly, key values and institutions that contemporary India possesses have great promise for managing multi-ethnic societies, especially in the developing world. These arise largely from four institutional structures that first Prime Minister Jawaharlal Nehru helped to establish in India: democracy, secularism, federalism, and the 3-language formula, according to Prof. Paul.

He pointed out that as the 21st century advances, India is slowly making use of its soft power assets, assisted by the increasing attention it is being paid by the global media and the scholarly world. He also said that soft power without hard power is a chimera and that they should not be seen in oppositional terms, especially for an aspiring global power. However, Prof. Paul reminded that the possession of soft power resources does not automatically make a country powerful in the world stage. It is when power assets are translated into influencing the behavior of other states then one can say power is materialized. The translation of assets into influence requires well-calibrated national strategies that assess and reassess one’s abilities in the changing global context and make timely policy adaptations. The current era of deepened globalization offers a powerful window of opportunity for emerging powers such as India to actualize their soft power resources more effectively. As India’s hard power capabilities, especially in the economic and military realms have accelerated following its economic liberalization since 1991, and it has made increasing efforts to acquire a global power status, it is high time to revisit the value of soft power resources as tools of grand strategy and foreign policy for this emerging power. What soft power does is that it gives legitimacy and credibility to a state’s leadership role in the world, and more effectiveness to the exercise and wielding of its hard power resources, he said.

Prof. Paul concluded by arguing for increased use of global communication networks and seeking the assistance of the extensive Indian diaspora for channeling and disseminating India’s soft power assets. One critical source of soft power dissemination is the diaspora. India is well-endowed in this area. Despite earlier skepticism of the value of the diaspora, today Indian expatriates have emerged as a key source of disseminating India’s culture, values and other soft power assets in the global arena. Many of the Indian arts, music, and dances are kept alive in these diaspora communities. Second and third generation Indians increasingly are yearning for knowledge and understanding of their roots. Many are returning to India for employment purposes. This trend is likely to continue as the advanced industrialized countries suffer possible economic downturn for a long period of time. However, in order to fully tap this resource, India needs to court the young second generation diaspora and those approaching retirement who may have the wealth and time to promote Indian ideals. Prof. Paul also said that harnessing soft power resources effectively would require India to become a more equitable and efficient society, and a global economic power, a state whose society transforms into a more egalitarian value system and an economy that commands a major share of the global wealth, especially global trade and investment. 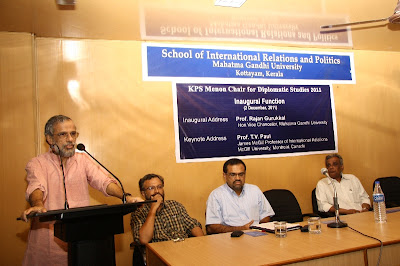