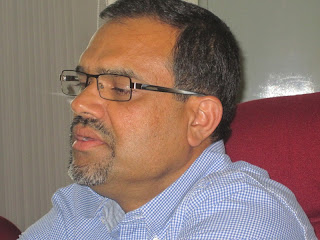 Prof. Paul said that the Indian nuclear doctrine has to take into account China’s doctrine and deployment policies which affect the way Pakistan formulates its doctrine. Stability is more problematic in this environment given the strong military relationship between Pakistan and China and the concerns it generates in India. He pointed out that both India and Pakistan are at the early stages of “nuclear learning.” They have “ambiguous nuclear doctrines and face major challenges arising from instability on both internal and transnational fronts.” The ambiguous doctrines add to the mixture of security problems South Asia faces, he said.

Prof. Paul forewarned that the Pakistani nuclear policy is leading to a highly destabilizing doctrine due to the short response times involved in crossing the nuclear threshold. Nuclear weapons have been perceived by the Pakistani elite as a “great strategic equalizer” in its relationship with India. In that sense, deterrence seems to be the main purpose of the Pakistani nuclear capability. However, in Pakistan’s case both doctrinal and command and control issues suggest a lack of clarity in the purposes that nuclear weapons are expected to serve, generating severe stability related concerns. There seems an overambitious agenda here for the expansion of nuclear weapons to meet a large set of national goals. He said that many a terrorist groups within and outside Pakistan would probably want to see nuclear weapons used between the two states. “In a situation like the 2008 Mumbai attacks India may respond conventionally, and if Pakistan resorts to nuclear attack using theatre missiles, the whole notion of deterrence could fly in the thin air. The involvement of non-state actors in the deterrent relationship has made deterrence very complex for South Asia, a fact that Pakistani planners seem to be oblivious to or want to deny.”  He also said that the possibilities for miscalculations and inadvertent escalations are huge in the strategic scenario of the two states in a crisis situation. Prof. Paul suggested more confidence building measures to prevent miscalculated or inadvertent escalations. More importantly, terrorist groups should be placed under tighter controls in preventing their bids to upset stability in the region. He reminded that Pakistan has a major responsibility in this regard given the vulnerabilities it is facing on multiple security fronts. Until that happens, “the complexity of South Asian deterrent relationships is likely to remain at a higher level than most other regions of the world today,” he said.